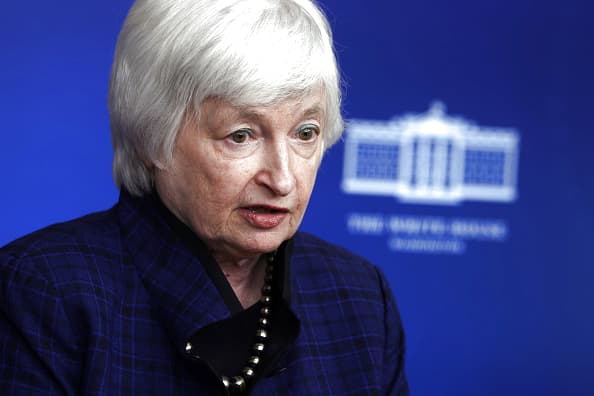 Treasury Secretary Janet Yellen speaks during a daily news briefing at the White House on May 7.

President Joe Biden is calling for a crackdown on rich taxpayers who avoid tax by hiding a big chunk of their income from the IRS.

Tax compliance is among the many ways Biden is seeking to raise tax revenue from households earning more than $400,000 a year to fund the American Families Plan. The legislation would boost spending for initiatives like expanded education, childcare and paid leave.

Underreported income, largely among the wealthy, is the biggest contributor to the so-called “tax gap,” according to a Treasury Department report issued Thursday.

More from Personal Finance:
Taxes would likely rise for the wealthy regardless of Biden’s plans
What we learned from Biden, Harris 2020 tax returns
How to reduce the taxes you will pay on retirement accounts

That gap is the difference between tax paid and tax owed. It was estimated to be $584 billion in 2019 and $7 trillion over the next decade, according to the Treasury.

Around 80% of the tax gap comes from underreported income — much of which is due to “opaque income sources that accrue disproportionately to higher earners,” the Treasury said.

It identifies certain non-labor income — from businesses like partnerships and proprietorships as well as rental income, for example. In such categories, individuals underreport roughly 55% of their income, according to the Department.

That means more than half their income, on average, isn’t being taxed.

“We don’t know the extent to which it’s intentional or unintentional. But it is high,” Janet Holtzblatt, a senior fellow at the Urban-Brookings Tax Policy Center, said.

That share is much higher than with other income sources. Employees who earn a salary or wages misreport about 1% of their income, for example.

The difference comes down to third-party reporting, tax experts said.

Employers file an employee’s job income each year on a W-2, which is distributed to the taxpayer and the IRS. In this case, the employer serves as a third-party verification. (Employees also have tax withheld from their paychecks over the course of the year.)

The same concept is true for investment income. Financial institutions would report a taxpayer’s dividend income on a 1099-DIV tax form, for example.

But there’s little or no third-party verification with certain business entities, according to tax experts.

Sole proprietors, for example, self-report their income and expenses to the IRS. In a partnership, any underreported income at the firm level trickles down to the individual returns of the business partners, Holtzblatt said. (The IRS has devoted more resources to auditing partnerships in recent years, however, she added.)

“A self-reporting system has its own inherent flaws,” said Leon LaBrecque, an accountant and certified financial planner at Sequoia Financial Group. “And there’s not an easy way around it.”

This doesn’t only apply to high earners, though, LaBrecque said. The same concept applies to a restaurant worker or bartender who doesn’t report cash tips as income, for example.

But the IRS can accrue more tax revenue by cracking down on the wealthy who underreport income, he added.

Biden’s tax plan calls for a strengthening of third-party reporting to the IRS, which the administration says is among the most effective ways to improve tax compliance.

It also seeks $80 billion in IRS funding over the next decade, partly to hire agents who can conduct complex tax audits on the wealthy and complicated business structures. The plan would overhaul IRS technology systems and increase penalties for tax evaders.

The Treasury estimates these changes would raise $700 billion over the next decade.