Charting a bullish reversal: Nasdaq ventures atop the breakdown point 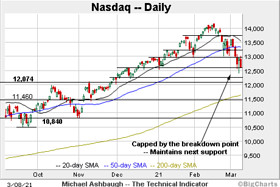 On a headline basis, the S&P 500 and Dow industrials have retained a bullish intermediate-term bias — even amid recent volatility — while the Nasdaq Composite is vying Tuesday to repair a more damaging March downdraft.

As illustrated, the S&P has staged a bullish reversal from major support (3,723).

The March low (3,723.3) has matched the inflection point, detailed repeatedly. (See the Feb. 23 review, for instance.)

More immediately, the prevailing upturn initially stalled near the breakdown point (3,870). The S&P has followed through atop this area early Tuesday. Constructive price action.

In fact, the index has briefly tagged all-time highs.

The prevailing upturn punctuates a massive three-session bullish reversal, spanning as much as 1,601 points, or 5.2%.

True to recent form, the Nasdaq Composite
US:COMP
continues to lag behind.

As illustrated, the index has maintained its next significant support (12,607). (See for instance, the Jan. 7 review.)

Conversely, the Nasdaq has initially stalled near its breakdown point (12,973). An extended retest of this area remains underway Tuesday.

On this wider view, the Nasdaq is vying to neutralize last week’s technical breakdown.

Recall the initial downdraft resolved a bearish head-and-shoulders top — defined by the January, February and March peaks — placing the index at two-month lows.

Conversely, important resistance matches the breakdown point, a level matching the 2020 peak (12,973). A swift reversal atop this area would neutralize last week’s breakdown.

Technically, the index has registered a bullish reversal from the 50-day moving average, rising to briefly tag all-time highs.

Slightly more broadly, the Dow has not strayed too far from its mid-February range amid constructive price action.

Against this backdrop, the S&P 500 and Dow industrials have retained a bullish intermediate-term bias, while the Nasdaq Composite’s price action has at least briefly signaled an intermediate-term caution flag.

Recall that the Nasdaq’s retest of its breakdown point — an area matching the 2020 peak (12,973) — remains underway Tuesday. A sustained reversal higher would neutralize the March downturn.

Moving to the small-caps, the iShares Russell 2000 ETF
US:IWM
has weathered a less aggressive March downturn.

The prevailing upturn punctuates a jagged retest of the 50-day moving average.

Looking elsewhere, the SPDR Trust S&P 500
US:SPY
has registered a bullish reversal from next support, rising amid a March volume spike.

Also recall that the preceding downdraft registered amid relatively tame market internals,not the hallmark of a material trend shift.

Placing a finer point on the S&P 500, the index has rallied to its former range.

More broadly, the S&P 500 has registered a bullish reversal from major support (3,723).

The prevailing upturn punctuates a recent whipsaw at the 50-day moving average.

As detailed previously, an eventual violation of major support (3,723) — and the late-January lows — would mark a material “lower low” likely signaling an intermediate-term trend shift.

The consecutive closes atop the bands signaled a then near-term extended posture — due a sideways chopping-around phase, that has subsequently transpired — amid a bullish longer-term outlook. (Also see the November break atop the bands, subsequent sideways price action, and upside follow-through.)

Separately, consider that the March low has punctuated a fleeting retest of the breakout point (24.00). The sharp reversal from major support signals that bullish momentum is intact.

The prevailing upturn has been fueled by increased volume, placing record highs under siege.

Tactically, the 50-day moving average, currently 74.20, is followed by the former breakout point (72.40). A sustained posture atop this area signals a comfortably bullish bias.

Technically, the shares have rallied to the range top, rising to challenge all-time highs.

The prevailing upturn punctuates a relatively tight March range. A near-term target projects to the 231 area on follow-through.

Conversely, the prevailing range bottom is closely followed by the 50-day moving average, currently 209.20. A breakout attempt is in play barring a violation.

More broadly, the shares are well positioned on the three-year chart, rising from a continuation pattern, of sorts, hinged to the 2020 V-shaped reversal.

Under Armour, Inc.
US:UA
is a well positioned large-cap name.

The shares initially spiked four weeks ago, gapping to 52-week highs after the company’s fourth-quarter results.

The subsequent pullback has been flat, positioning the shares to build on the initial strong-volume spike.

As illustrated, the shares have registered a bullish reversal from the March low, rising to tag a fractional record close amid increased volume.

The prevailing upturn punctuates an otherwise orderly three-week range, hinged to the sharp January rally. An intermediate-term target projects to the 74 area on follow-through.

The subsequent flag pattern has formed amid decreased volume, positioning the shares to build on the nearly straightline February spike.

Tactically, the prevailing range bottom (63.60) is followed by the post-breakout low (59.70). The prevailing uptrend is firmly-intact barring a violation.