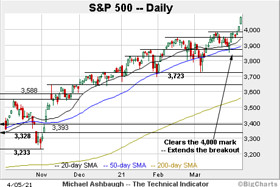 In the process, the S&P 500 and Dow Jones Industrial Average have knifed to record highs, while the Nasdaq Composite has staged a potentially consequential trendline breakout.

As illustrated, the S&P has taken flight, extending a break atop the 4,000 mark.

Against this backdrop, the Nasdaq Composite
US:COMP
has extended a rally atop the 50-day moving average.

The breakout places the January peak (13,729) under siege, an area better illustrated below.

On this wider view, the Nasdaq has knifed to six-week highs, extending a sharp break atop trendline resistance.

Additional overhead matching the January peak (13,729) is currently under siege.

As illustrated, the index has spiked to all-time highs, rising from a flag pattern underpinned by the 33,000 area. (Also see the hourly chart.)

Meanwhile, the S&P 500 has also taken flight, knifing atop the 4,000 mark for the first time on record.

The prevailing upturn punctuates a successful March retest of the 50-day moving average.

As detailed above, the major U.S. benchmarks have registered decisive April breakouts.

The S&P 500 and Dow Jones Industrial Average have knifed to all-time highs, while the Nasdaq Composite has staged a sharp trendline breakout.

Notably, the April spike has registered as statistically unusual, with each big three benchmark closing atop its 20-day Bollinger bands. Each index is vying Tuesday for the more reliably bullish consecutive closes atop the bands. (As always, closes atop the Bollinger bands signal an unusually strong two standard deviation breakout.)

Moving to the small-caps, the iShares Russell 2000 ETF
US:IWM
has rallied less aggressively from the March low.

Still, the prevailing upturn places it back atop the 50-day moving average, and within striking distance of record highs.

Technically, the mid-cap benchmark has extended a rally atop its former breakout point (Feb. peak), rising to challenge record territory.

The prevailing upturn originates from a March test of the 50-day moving average.

In the process, the index has swiftly reached its intermediate-term target (4,085) detailed previously. (Tuesday’s early session high (4,086) has registered nearby.)

Against this backdrop, the S&P is vying Tuesday to register an unusual second straight close atop its 20-day volatility bands.

As always, consecutive closes atop the bands signal a tension between time horizons.

Though near-term extended, and due to consolidate, bullish momentum has registered as extreme, likely laying the groundwork for longer-term gains. (See the early-January break atop the bands, subsequent sideways price action, and upside follow-through.)

Beyond the details, the S&P 500’s strong second-quarter start is constructive. All technical trends continue to point higher.

As illustrated, the group has sustained a recent break to record territory.

The prevailing upturn builds on the March rally atop trendline resistance closely tracking the 50-day moving average. (The 50-day’s slope has recently ticked higher, also consistent with a trend shift.)

Tactically, the breakout point (68.00) is followed by the post-breakout low (67.55). The prevailing rally attempt is firmly intact barring a violation. (Also see the March 25 review.)

Late last month, the shares knifed to five-month highs, rising from an inverse head-and-shoulders pattern defined by the December, January and March lows.

The subsequent flag-like pattern has formed amid decreased volume, positioning the shares to build on the initial spike. Tactically, a sustained posture atop the breakout point (149.90) signals a firmly-bullish bias.

Tactically, the former range top (275.00) pivots to support. A breakout attempt is in play barring a violation.

Technically, the shares have rallied to three-year highs, clearing resistance matching the March peak. A near-term target projects to the 68 area.

Conversely, the breakout point (62.20) closely matches the top of the gap and is followed by a near-term floor, circa 60.70. A sustained posture atop this area signals a bullish bias.

As illustrated, the shares have knifed to 52-week highs, clearing resistance matching the December and January peaks. The upturn punctuates a late-March flag pattern.

Though near-term extended, and due to consolidate, the shares are attractive on a pullback. Initial support, circa 116.00, is followed by the firmer breakout point (114.75).

More broadly, the shares are well positioned on the 10-year chart, challenging major resistance matching the 2018 and 2019 peaks.