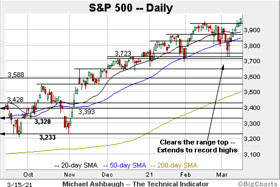 Amid the cross currents, the S&P 500 and Dow industrials have staged tandem breakouts — tagging all-time highs — while the Nasdaq Composite has sustained a break to firmer technical ground, though it remains far from record territory.

As illustrated, the S&P has cleared its range top, rising to record highs.

The breakout punctuates a flag-like pattern, underpinned by near-term support (3,915).

In fact, the index has tagged an intraday record high across six straight sessions.

Tactically, near-term floors are not well-defined, as illustrated on the daily chart. Headline support points match the Feb. peak (32,009) and the deeper breakout point (31,650).

Perhaps not surprisingly, the Nasdaq Composite
US:COMP
continues to lag behind.

A retest of the former range top (13,607) is underway early Tuesday.

Perhaps more importantly, the index has extended its rally atop the breakdown point, a level matching the 2020 peak (12,973).

Moreover, the rally atop the breakdown point (12,973) encompassed two 7-to-1 up days — across a three-session window — neutralizing the early-March downdraft. (In this context, an “up day” means advancing volume surpassed declining volume by a 7-to-1 margin.)

As always, consecutive closes atop the volatility bands are statistically unusual, and signal a tension between time horizons.

Specifically, the index is near-term extended, and due to consolidate, following an aggressive break outside the range of its “normal” trailing 20-day volatility.

Recall the prevailing upturn punctuates a successful test of the 50-day moving average at the March low.

Meanwhile, the S&P 500 has registered record highs amid a less decisive breakout.

Still, the rally to previously uncharted territory is straightforwardly bullish.

As detailed above, the major U.S. benchmarks are acting well technically, though the March price action remains uneven.

On a headline basis, the Dow Jones Industrial Average has knifed to record territory — amid a massive two standard deviation breakout — while the S&P 500 has tagged all-time highs less decisively.

Meanwhile, the Nasdaq Composite continues to lag behind, though the index has reclaimed its 50-day moving average.

Moving to the small-caps, the iShares Russell 2000 ETF
US:IWM
has extended a break to record territory, rising amid decreased volume.

To reiterate, the breakout point, circa 230.30, pivots to support.

The prevailing upturn punctuates a relatively orderly one-month range, and a successful test of the 50-day moving average.

Placing a finer point on the S&P 500, the index has broken to record territory.

On further strength, near- to intermediate-term targets project from the March downturn to the 4,100 and 4,175 areas.

Beyond technical levels, the U.S. sub-sector backdrop remains bullish, and the prevailing uptrend remains firmly-grounded as it applies to the internals. The S&P 500’s bigger-picture backdrop continues to support a bullish intermediate-term bias.

Earlier this month, the group staged a bull-flag breakout, rising to record highs.

Underlying the upturn, its relative strength index (not illustrated) has registered six-month highs, improving the chances of longer-term follow-through.

As illustrated, the shares have staged a strong-volume trendline breakout, knifing to three-month highs.

Tactically, the breakout point (216.90) is followed by trendline support roughly matching the 100-day moving average, currently 213.40. The 100-day has marked a bull-bear inflection point, and the prevailing recovery attempt is intact barring a violation.

(On a granular note, the prevailing upturn punctuates a double bottom — the W formation — defined by the January and March lows.)

Technically, the shares have knifed to 33-month highs, clearing resistance matching the February peak. The breakout builds on the strong-volume late-January spike. An intermediate-term target projects to the 32.50 area.

More broadly, the shares are well positioned on the three-year chart, rising from a massive head-and-shoulders bottom defined by the 2018 and 2020 lows.

As illustrated, the shares have rallied to the range top, rising to tag a nominal record close. The upturn punctuates an orderly six-week range.

Tactically, the breakout point, circa 84.00, is followed by trendline support almost precisely matching the 50-day moving average, currently 75.90. The prevailing uptrend is intact barring a violation.

As illustrated, the shares have reached 52-week highs, rising from a relatively tight three-week range. Tactically, the breakout point (38.35) is followed by the former range bottom (34.40).