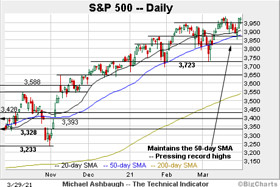 Technically speaking, the U.S. benchmarks’ bigger-picture backdrop remains bullish, on balance, though the prevailing market technicals are not one-size-fits-all.

Amid the cross currents, the S&P 500 has sustained a bullish reversal from major support, rising to challenge record highs, and within striking distance of the marquee 4,000 mark.

As illustrated, the S&P has rallied to the range top, rising to challenge record highs.

has extended its rally attempt, rising to challenge record territory.

As illustrated, the index is not challenging record highs.

Instead, the index is vying to simply maintain major support matching the 2020 peak (12,973), an area also illustrated below. A potentially consequential retest remains underway.

On this wider view, the Nasdaq has registered an extended test of major support (12,973).

The specific area matches the 2020 peak (12,973) a level that also marked the early-March breakdown point. (Recall the initial violation of the 2020 peak punctuated a head-and-shoulders top, a bearish pattern that was subsequently neutralized by the swift reversal back to the range, fueled by two 7-to-1 up days.)

Tactically, a sustained violation of support would signal a bearish intermediate-term bias.

Recall that last week’s low (32,071) registered above the breakout point (32,009) to punctuate a successful retest.

Meanwhile, the S&P 500 has staged a bullish reversal from its 50-day moving average.

The prevailing upturn places the marquee 4,000 mark within striking distance.

Broadly speaking, the prevailing backdrop is largely bullish, though it is not one-size-fits-all.

On a headline basis, the S&P 500 and Dow industrials continue to press record territory.

Meanwhile, the Nasdaq Composite remains far from record highs, as it vies to simply maintain major support (12,973). A potentially consequential retest of this area remains underway.

Moving to the small-caps, the iShares Russell 2000 ETF
IWM,

As illustrated, the MDY has maintained a posture comfortably atop its 50-day moving average, outpacing the small-caps.

Separately, the prevailing bullish reversal has been punctuated by a rally atop the former breakout point.

has also reclaimed its breakdown point, an area matching the February peak.

The strong-volume bullish reversal punctuates a successful test of the 50-day moving average.

Placing a finer point on the S&P 500, the index has rallied toward its range top, rising to challenge record highs.

The prevailing upturn punctuates a jagged test of major support (3,870) and the 50-day moving average, currently 3,881.

Within the range, the Feb. peak (3,950) remains an inflection point.

Also recall that near- to intermediate-term targets technically project to the 4,050 and 4,085 areas, detailed previously.

As illustrated, the group has tagged a nominal record high. The prevailing upturn punctuates a tight mid-March range, as well as an extended February test of the 50-day moving average.

Tactically, the 50-day moving average, currently 75.35, is rising toward the range bottom (75.80). The prevailing rally attempt is firmly-intact barring a violation.

has returned 11.6% and remains well positioned.

Earlier this month, the shares knifed to 52-week highs, clearing resistance matching the December peak. The subsequent pullback has been fueled by decreased volume, placing the shares 11.2% under the March peak.

Tactically, the breakout point, circa 240, is followed by the post-breakout low (231.70). A sustained posture higher signals a firmly-bullish bias.

Technically, the shares have knifed atop trendline resistance, rising to challenge record territory.

The prevailing upturn has been fueled by tandem volume spikes — and subsequent sideways price action — laying the groundwork for a potential breakout.

Slightly more broadly, the shares are rising from a year-to-date range hinged to the steep early-January rally. An intermediate-term target projects to the 222 area on follow-through.

As illustrated, the shares are challenging a three-month range top matching record highs. The prevailing range is underpinned by gap support. (See the early-January gap and subsequent retest.)

Tactically, near-term support (204.60) is followed by the 50-day moving average, a recent bull-bear inflection point. A breakout attempt is in play barring a violation.

More broadly, the shares are well positioned on the three-year chart, rising from a continuation pattern hinged to the steep late-2020 rally.

The shares started March with a strong-volume breakout, reaching 34-month highs. The subsequent orderly range is a bullish continuation pattern.

More immediately, the prevailing upturn has been fueled by increased volume, improving the chances of more decisive follow-through. Tactically, a near-term floor matches the former range top (34.50). A breakout attempt is in play barring a violation.