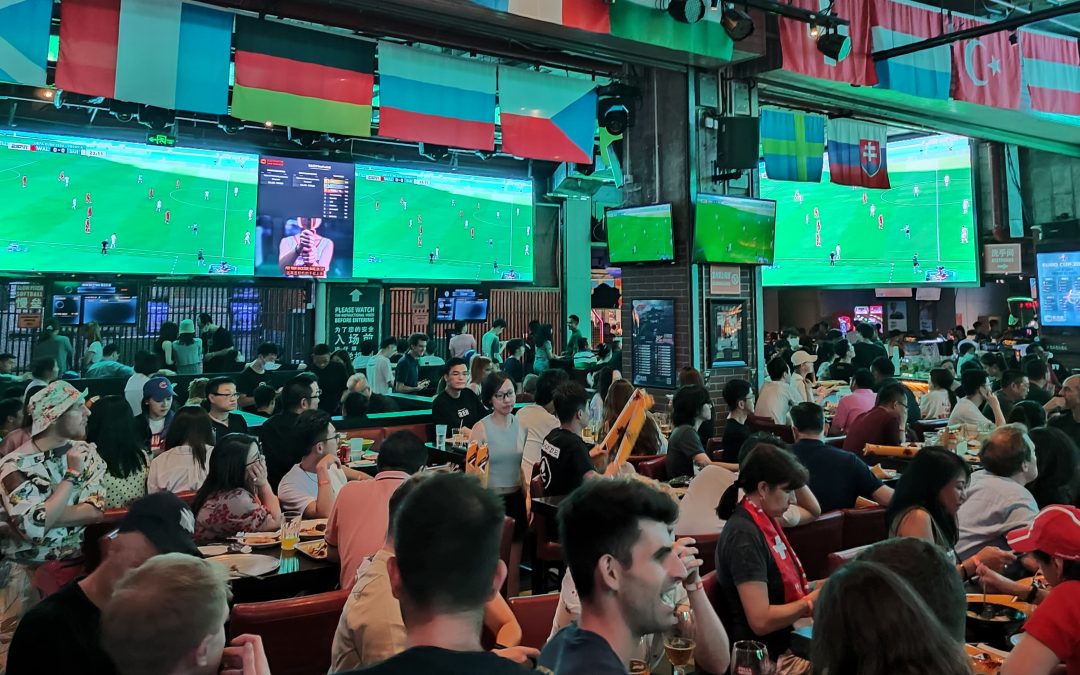 Football fans watch UEFA Euro 2020 Championship Group A match between Wales and Switzerland at a pub on June 12, 2021 in Shanghai, China.

These companies are paying up to reach overseas markets, while building global prestige for shoppers at home.

“Chinese brands do not use football only for local marketing (selling their products to Chinese consumers), but also to open up new markets, especially in Europe,” said Pierre Justo, managing director of international, media and sports at consulting firm Kantar, in an email.

The Chinese government has encouraged homegrown companies to go abroad, while many businesses are eager to boost their brands by selling overseas.

Based in Qingdao, Shandong province, Hisense said that by 2025, it aims for overseas markets to generate half of total revenue, valued at about $23.5 billion. That’s triple the $7.93 billion it made abroad during the pandemic last year.

The television and home appliance manufacturer claims that during the first five months of the year, its European sales more than doubled from a year ago, helped by a surge in demand for refrigerators in France.

Hisense began pushing into Europe over 10 years ago and said it now has more than 8,000 employees in the continent, with offices in Germany, Spain and 20 other countries. The company sponsored the 2018 Fifa World Cup and has signed a deal for 2022.

Another Chinese sponsor, smartphone company Vivo, said it officially entered six European countries in October and claims to have more than 400 million users in more than 50 countries.

A full list of Euro 2020 sponsors wasn’t available, but the ones that the Union of European Football Associations lists on its website include Russian energy company Gazprom, German automaker Volkswagen and U.S. express delivery company FedEx.

Alibaba-affiliated Alipay and ByteDance’s TikTok are among the other companies paying to have their names roll along the stadium perimeter behind soccer players in June and July this year.

The month-long Euro 2020 soccer tournament, which began June 11, was postponed from last year due to the pandemic. During the last championship in 2016, 2 billion people tuned in to live television broadcasts, boosted by increased interest from China and Brazil, according to an UEFA report cited by the Associated Press.

In 2018, Alipay agreed to an eight-year partnership that included Euro 2020 and Euro 2024. The deal was worth 200 million euros ($238.5 million), according to sources cited by the Financial Times. For Euro 2020, Alipay’s deal includes displaying English and Chinese-language versions of its subsidiaries.

UEFA said it was unable to disclose the cost of partnerships with Chinese brands “due to confidentiality clauses.” When contacted by CNBC, Ant declined to confirm the size of its eight-year partnership deal.

Alipay, one of the two major mobile payment operators in China, has attempted to expand globally by working with overseas merchants and Chinese tourists. The number of Chinese travelers has plummeted since the pandemic forced countries to shut borders last year.

Another Chinese company looking to profit from the tournament is iQiyi, which acquired the online live streaming rights for Euro 2020. Its subscriber growth has stagnated at just above 100 million, while the company posted another loss of $193.4 million in the first quarter.

The deal has attracted “considerable” visitor traffic, as well as opportunities for business partnerships with Volvo, Heineken, Volkswagen and Meituan, Lingxiao Yu, CEO of iQiyi Sports, said in a Chinese statement translated by CNBC.

He declined to share whether more people have bought subscriptions as a result. State broadcaster CCTV has the rights to air the games live on television.

While Euro 2020 has been one of the most popular topics in recent weeks on Weibo, China’s version of Twitter, it’s unclear how much of China’s soccer market can grow without an international-level team.

Over the last two decades, China has tried unsuccessfully to build its own teams by paying top dollar for foreign players and coaches, Kantar’s Justo said. The only way for China to develop its own soccer stars will be to cultivate a local culture around the sport from the bottom up, he said.

The contrast between the global interest in soccer versus China’s is apparent on TikTok.

The official account for Euro 2020 has 2.5 million followers, versus only 291,000 followers on Douyin — the highly popular Chinese version of the short video and streaming app also owned by ByteDance.

However, working with China brings its own risks.

In 2019, an NBA-affiliated tweet supporting protesters in Hong Kong prompted companies in the mainland to suspend their partnerships, for an estimated cost of up to $400 million to the association.

Official video streaming platform Tencent resumed broadcasting most games after a few days, while state broadcaster CCTV stopped airing the games for more than a year, according to state media.