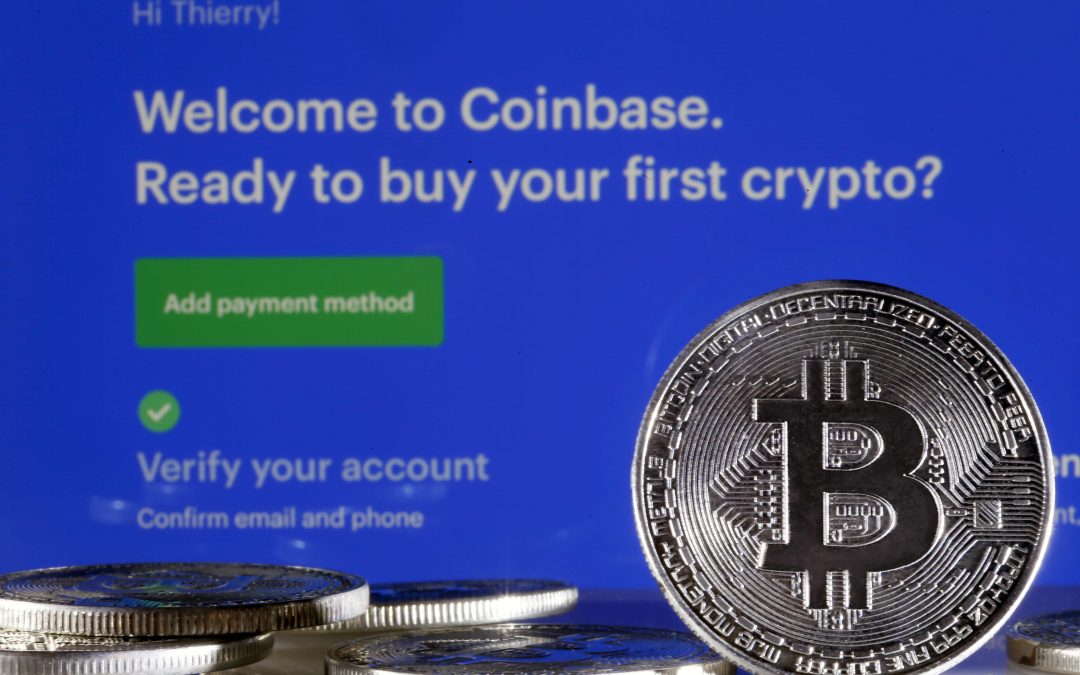 Coinbase is set to go public through a blockbuster direct listing Wednesday, and investors are hailing it as a “watershed” moment for the cryptocurrency industry.

The digital currency exchange could be valued at as much as $100 billion, making it more valuable than major trading venue operators like New York Stock Exchange parent Intercontinental Exchange and Nasdaq.

It comes as the prices of bitcoin and other virtual currencies have soared over the past year, as investors looked to diversify their portfolios in the belief that a spike in inflation is coming. Bitcoin hit a fresh record high of more than $64,000 on Wednesday and has more than doubled in value year-to-date.

Coinbase’s public market debut is “potentially a watershed event for the crypto industry and will be something the Street will be laser focused on to gauge investor appetite,” said Dan Ives, a tech analyst at Wedbush Securities.

“It’s going to legitimize a lot of what these companies are doing,” Marcus Swanepoel, CEO of London-based crypto platform Luno, said of the Coinbase debut. “For one, it’s going to show just how big the industry is and how much it’s growing.”

Coinbase is the largest cryptocurrency company to go public so far. It’s the world’s second-largest digital asset exchange by trading volume, according to CoinMarketCap, and has been credited with bringing crypto into the mainstream with its easy-to-use app.

But there are a number of risks ahead. Cryptocurrencies are notorious for their wildly volatile price moves, and skeptics think it may be in a massive market bubble that’s bound to burst at some point. Meanwhile, global regulators are increasingly trying to bring crypto under their oversight, with India’s government even looking to ban digital currencies.

Coinbase estimates it made $1.8 billion in revenue in the first quarter of 2021, a whopping 844% increase compared to the $190.6 million it generated in the same period a year earlier. That was largely thanks to the huge jumps in price from digital coins like bitcoin and ether.

Given Coinbase’s business is heavily tied to the performance of major cryptocurrencies, there’s a risk that momentum could swing the other way if there’s a significant pullback in the market.

“Crypto companies will need to figure out how to diversify their revenue streams eventually,” said Hunter Merghart, a former Coinbase executive who is now head of U.S. for Luxembourg-headquartered cryptocurrency exchange Bitstamp.

“I think right now we are still very much in the investment phase and the overall crypto pie will continue to grow.”

Bitcoin notoriously rose to almost $20,000 in late 2017, before crashing to almost $3,000 the following year. This price volatility has been a key criticism from bitcoin’s detractors, who say it fails key tests for currencies, like acting as a medium of exchange or store of value.

However, crypto investors believe such a precipitous price drop — known in the industry as “crypto winter” — is unlikely in the near future. They see bitcoin as a sort of “digital gold” that’s uncorrelated with other assets and can serve as a hedge against rising inflation.

“There’s been many surges in the price of bitcoin over the last 10 years,” said Swanepoel. “When it does come down, it sets a new baseline and the growth continues on that new baseline.”

“I actually think the baseline is going to be significantly higher out of this cycle,” he added. “If you look at commodity markets, they have normal cycles and then they have ‘super cycles.’ I suspect this is a super cycle for crypto. It can accelerate a lot longer now.”

Earlier this year, U.S. Treasury Secretary Janet Yellen warned in her confirmation hearing that bitcoin and other cryptocurrencies are mainly used for illicit activity and that the government may need to “curtail” their use.

Coinbase says it’s regulated and has partnerships with a number of banks. But it warned in its prospectus that negative changes to regulations could “adversely affect” its financial condition.

Before former President Donald Trump’s term ended, the Treasury Department proposed a rule that would require financial services firms to record the identities of cryptocurrency holders. This proved controversial with many crypto firms.

“Regulatory risk is high because crypto platforms are currently not subject to the same rules as traditional exchanges or trading platforms are,” said Stéphane Renevier, an analyst at financial education platform Finimize.

“Some of Coinbase’s activities (such as some of its prime brokerage services and its use of its own capital to trade) might be subject to tighter regulatory oversight in the future,” he added. “Given that the regulatory landscape is evolving extremely rapidly, the company is always at risk from a change in status, which could impact some of its most profitable activities.”

Jesse Powell, CEO of Coinbase rival Kraken, told CNBC that he thinks there “could be some crackdown” on cryptocurrencies.

Garry Tan, founder of venture capital firm Initialized and an early investor in Coinbase, said the cryptocurrency market was still in its infancy.

“We’re not there yet,” he told CNBC. “We’re still in the very early innings of that, but it’s not so crazy any more.”

But Tan and other Coinbase bulls say the company has created a competitive “moat” around its business that should allow it to flourish even with the advent of new regulations.

“Coinbase is like crypto’s tech giant,” Tan added. “Coinbase’s (debut), and it existing as one of the cornerstone tech companies in Silicon Valley, is very powerful because it means that, just as the personal computer revolution needed Apple and Microsoft, the crypto revolution needs Coinbase.”

Crypto industry insiders say that Coinbase is just one part of the story. There are other emerging trends in the market, such as digital collector’s items and so-called decentralized finance, which aims to recreate traditional financial products without middlemen like the banks. Plus, Coinbase may face steeper competition from rivals such as Binance and Kraken, the latter of which is weighing its own share listing for next year.