Here’s how Democrats want to raise taxes on the rich 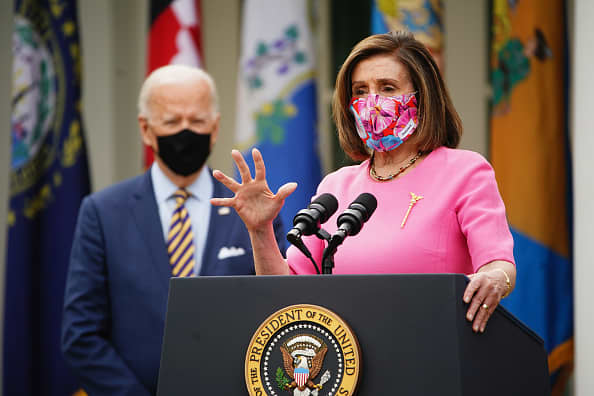 House Speaker Nancy Pelosi, a Democrat from California, wear protective masks while speaking during an event in the Rose Garden of the White House in Washington, D.C., on Friday, March 12, 2021.

Democrats may soon be raising taxes on the rich, as lawmakers pivot to priorities beyond pandemic relief.

A change in the way Uncle Sam taxes the wealth, capital gains and estates of the super wealthy may be on the table, according to tax experts.

The White House and congressional Democrats have eyed higher taxes to raise trillions of dollars in additional revenue to, for example, improve the country’s infrastructure and combat climate change.

President Joe Biden and his advisors are considering up to $3 trillion in new spending for such endeavors, the New York Times reported Monday.

There’s a chance sweeping changes to the tax code may not come to pass, especially if they require Republican backing. But the richest Americans can expect at least some kind of tax hike, experts said.

“The question we’re really dealing with now is not whether tax rates will rise, but when, and which taxes?” said Alison Hutchinson, a managing director and senior wealth planner at Brown Brother Harriman in New York.

At its core, Biden’s tax plan centers on raising taxes for Americans earning more than $400,000 (it’s still unclear whether that’s for families or per individual). The plan would boost the top income tax rate and tax more of their income for Social Security, for example.

And Biden would increase levies more for millionaires and billionaires.

For example, he wants to tax long-term capital gains at the same rate as wages for households making more than $1 million a year.

Wealthy Americans currently pay a 37% rate on wages and a lower 20% rate on investment earnings (plus a 3.8% surtax).

The Biden tax plan would up the capital gains tax for millionaires to 39.6% — the same rate at which the president would tax job income for high earners.

Treasury Secretary Janet Yellen told the Senate in January that this change to capital gains taxes was a long-term goal of the Biden administration.

“We recognize that our tax system cannot be tilted toward corporate interests and the wealthy, while those that are sustained predominately by wages bear an unequal burden,” she said in written testimony during her confirmation hearing.

The capital gains policy could stretch beyond the consistently rich, though.

That could happen if a business owner who makes $75,000 a year sells their company for more than $1 million, for example, said Robert Keebler, a tax advisor and certified public accountant in Green Bay, Wisconsin.

“You could argue that’s fair for a Wall Street tycoon making a lot of money each year, but it might not seem so fair to a guy who sells his business one year,” Keebler said.

Biden has also proposed changing rules around wealth transfers, like with the estate and gift tax.

Current law lets heirs receive an asset such as a stock or home at its current market rate (rather than the original owner’s cost) courtesy of a “step-up in basis” at death.

That allows the heir to sell the asset without paying tax on the appreciation over the owner’s life.

On the campaign trail, Biden said he’d eliminate the step-up in basis.

If Congress can’t agree on anything, that’s what would happen anyway.

He’d also reduce the amount individuals can transfer without paying estate and gift taxes, to $3.5 million in bequeaths at death and $1 million in lifetime gifts. There’s also a chance Biden may raise the tax rate from the current 40%, said Bruce Steiner, an attorney at Kleinberg, Kaplan, Wolff & Cohen.

The Tax Cuts and Jobs Act raised the tax-free threshold to $11.7 million for individuals in 2017. That threshold will revert to the pre-TCJA caps in 2026, due to sunset provisions baked into in the law.

That means more estates (those over about $5.5 million for individuals) will automatically be subject to taxes on wealth transfers in a few years.

“If Congress can’t agree on anything, that’s what would happen anyway,” Steiner said.

Sen. Elizabeth Warren, D-Mass., holds a news conference to announce legislation that would tax the net worth of America’s wealthiest individuals on March 1, 2021 in Washington.

Biden hasn’t proposed an annual tax on total wealth. However, the policy is on the wishlist of some more liberal members of the House and Senate.

The bill would levy a 2% wealth tax on the net worth of households and trusts ranging from $50 million to $1 billion. The tax would be 3% for anything over $1 billion.

About 100,000 Americans would be subject to a wealth tax in 2023, according to Emmanuel Saez and Gabriel Zucman, economists at the University of California, Berkeley. The policy would raise at least $3 trillion over a decade, they found.

“When people universally pan the Warren wealth tax and say there’s a low likelihood, I agree the first cut won’t be signed off by Congress,” Hutchinson said. “But I think tax planners need to focus on these types of proposals, because something like this could very well come through.”