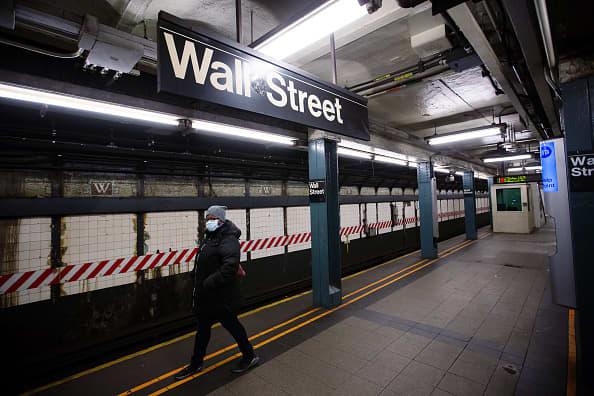 A passenger wears a protective mask at the Wall Street subway station in New York, on Monday, March 30, 2020.

An announcement that Colonial Pipeline has restarted its operations at 5 p.m. ET on Wednesday calmed some investors who had been concerned about its continued ability to supply the East Coast with gasoline.

The company said in a statement that it could take “several” days for the supply chain to return to normal service, but that it would move as much gasoline, diesel and jet fuel as is safely possible as it works to restore normal operations after a hack cause it to suspend service last week.

The Dow fell 681 points, or 1.99%, to notch its single-worst session since January. The blue-chip index clinched its worst day since February on Tuesday. The S&P 500 lost 2.1%, its biggest one-day drop since February, while the tech-heavy Nasdaq Composite slid 2.6%.

Traders across the board cited a rise in interest rates, triggered by a hotter-than-expected inflation report, for the midweek slump.

The Labor Department reported that the prices American consumers pay for goods and services accelerated at their fastest pace since 2008 last month with the Consumer Price Index spiking 4.2% from a year ago.

Excluding volatile food and energy prices, the core CPI increased 3% from the same period in 2020 and 0.9% on a monthly basis.

“Last week the S&P 500 ended near all-time record highs and today, three days later, it is off by more than 4%!” wrote Jim Paulsen, chief investment strategist of The Leuthold Group.

“Investors are not only dumping growth stocks which traditionally have not held up well during bouts of higher inflation, but later in the day began unloading nearly all stocks as fears increased that the [Federal Reserve] may be forced to bring tapering and perhaps rate hikes forward,” he added.

Investors have been quick to dump growth stocks amid creeping inflation concerns since rising prices tend to squeeze margins and erode corporate profits. If price pressures run too hot for a sustained period of time, the Federal Reserve would be forced to tighten monetary policy.

Tech, a top-performing sector in 2020 amid the height of the Covid-19 pandemic, has come under pronounced pressure in recent weeks.

Shares of Alphabet, Microsoft, Amazon, and Apple all fell more than 2%. Chipmakers as tracked by the VanEck Vectors Semiconductor ETF dropped 4.1%. The Technology Select Sector SPDR is off more than 5% this week and 6% this month.