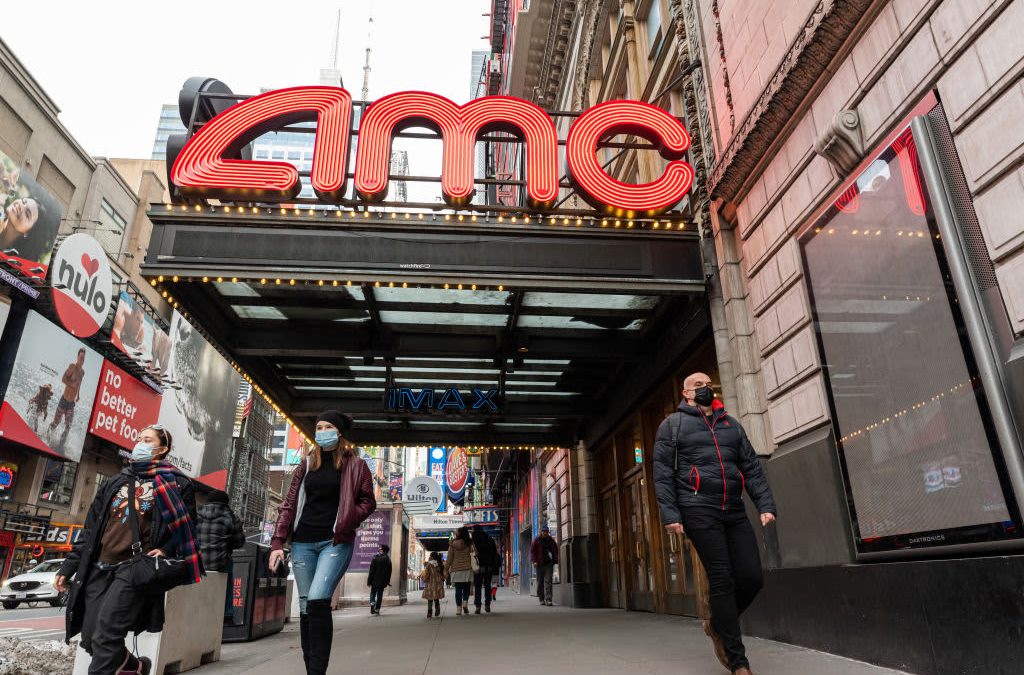 People walk outside the AMC Empire 25 movie theater in Times Square as the city continues the re-opening efforts following restrictions imposed to slow the spread of coronavirus on December 23, 2020 in New York City.

AMC Entertainment – Shares of the movie theater company jumped 13.5% after B. Riley Securities upgraded the stock to a buy rating. “‘Godzilla vs. Kong’ destroys lingering concerns around theatrical window importance and demonstrates a solid path to resurgence,” the firm wrote in a note to clients. B. Riley also lifted its target on the stock to $13, which is 39% above where shares closed on Thursday.

Charles Schwab — The brokerage firm rose 2.7% to a 52-week high after Goldman Sachs put the stock on its Conviction List ahead of its earnings on April 15. The firm said Schwab should beat expectations driven by higher net interest margin and trading driven by strong retail engagement. Goldman also hiked its 12-month price target on Schwab to $77 per share from $67 per share.

Roblox — Shares of the online gaming platform jumped 5.1% after Goldman Sachs initiated coverage on the stock with a buy rating. The Wall Street firm said Roblox’s creation and monetization of content allows it to outsource game development costs to its creators while retaining the economic upside. Roblox went public via a direct listing last month.

GameStop — Shares of the video game retailer were volatile on Monday, ending the day down 2.4%. The company’s stock price dropped as much as 14% earlier in the day. The weakness came after GameStop said it may sell up to $1 billion worth of additional shares following a historic Reddit-fueled short squeeze. The company said it intends to use the proceeds to further accelerate its e-commerce transformation and to strengthen its balance sheet.

Trimble — Shares of the digital construction and agriculture company popped 3.7% after Cathie Wood’s Ark Innovation purchased 453,214 of its shares. Based on Thursday’s closing price of around $83 per share, Ark’s purchase was worth north of $37.6 million.

Ford, General Motors — The legacy auto stocks rose on Monday after Wells Fargo initiated coverage of the companies at overweight. Ford popped 4.4%, while GM’s shares rose 5.6%. Wells Fargo said in a pair of notes that Ford and GM were both poised to be leaders in the next generation of vehicles and transportation.

Planet Fitness — Shares of the fitness chain climbed 1.7% after the Wall Street Journal reported that it plans to open up to 100 new locations in the coming fiscal year, adding to its current total of more than 2,100. Chief finance officer Tom Fitzgerald told the newspaper that Planet Fitness will also invest in its app.